We are welcomed by Van Sambeek to the German sow farm of the Niemann family. 'Since 2014, this progressive sow farmer has had a shed with farrowing pens with free-range options. This way of working pleased Niemann perfectly,' says the Verba sales manager. 'The higher costs due to extra floor space, the pens are 6 square meters each, he earns back with better production results and savings on labor. Think of not having to move piglets and less frequent cleaning and disinfection. Moreover, there is no need to invest in the space for piglet rearing," Van Sambeek explains.

When the German sow farmer wanted to expand the number of free-range farrowing pens by 140, it gradually became clear that the new German welfare requirements would become stricter than those 6 square meters. Together with his barn designer, he oriented himself to the possibilities and decided on 7.1 square meters per pen. 'In the preliminary process, Niemann discovered the KZB family feeder. The craftsman immediately saw the advantages of the sow and her piglets being able to eat from one feeder together,' Van Sambeek explains. 'So in the fall of 2021 he asked if he could test two troughs with a feed width of 40 centimeters on his own farm.' In two pens, the normal troughs were replaced by the KZB family feeders. 'What the sow farmer immediately noticed was the difference in behavior of the sows and piglets in those two test pens,' says Van Sambeek. 'Because the sows could decide for themselves when and how much feed they wanted to take in, they had a certain calmness about them. They produced more milk and were more social because they could eat and drink from the same feeder together with their piglets. As a result, more and better quality piglets were weaned. During the rearing phase, Niemann also saw the piglets perform better in the KZB test pens. 'After the farrowing sows were weaned, the weaned piglets in those two pens continued undisturbed. They were used to eating from the family feeder where weaning feed was in the storage bin from then on,' explains Van Sambeek. 'In the farrowing pens with troughs, more piglets had trouble getting used to the situation. This created growth differences.'

After a round of testing, the German sow farmer was completely won over. Despite the not very prosperous conditions in pig farming, he decided to invest anyway. Van Sambeek: 'All 160 troughs in the free-range stall pens were rücksichtslos replaced, because the immediate profit to be made was so great.' Niemann realizes a 3 percent higher piglet survival to weaning and a 0.1 more favorable feed conversion in piglets in the trajectory weaning to 30 kilograms, Van Sambeek reports. 'Sow mortality is 3.5 percent lower. They are fitter, have better intestinal health and in the farrowing phase take in an average of 1 kilogram less feed per day and perform better.' The new farrowing pen that Niemann commissioned in May 2022 is also equipped with KZB family feeders. 'In each farrowing unit, performance is achieved in an oasis of calm.' Van Sambeek proves this by entering a farrowing pen with a sow suckling her piglets. 'She doesn't look up or back. Imperturbably, the pigs continue what they are doing.'

3 percent more piglets are weaned when they are born in farrowing pens with KZB family feeders, rather than with troughs. When weaned at 28 days of age, a "KZB piglet" weighs

average 7.1 kilograms, almost 1 kilogram more than a "trough piglet. With one type of piglet feed in the KZB troughs, a piglet grows to 31.2 kilograms in 47 days with a feed conversion of 1.56. Previously, four piglet feeds were required and the feed conversion was 1.66. 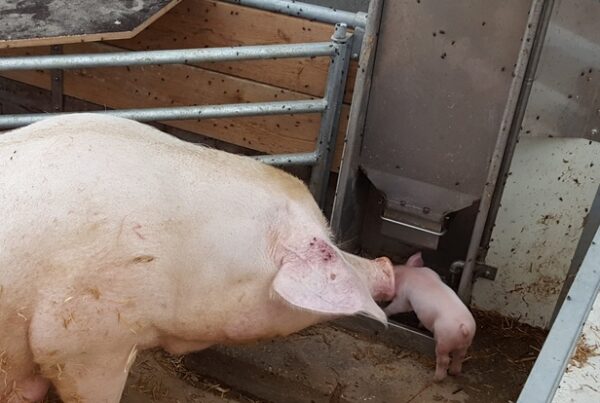